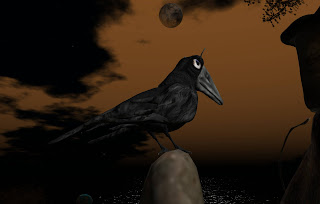 A fragment of an imaginary Anglo-Saxon poem in heroic alliterative verse.

The ravens arrive thundering in thick throngs
Their wings furiously flap as they flock
Mobbing the traveller, mocking with malign caws
“Hraak, hraak,” they cry, the ravening ravens.

A faint heart is fearful of the foul birds
A weak-headed wight fares poorly against wise foes
The strong man stays his course, striving ever onwards
Doughty are his deeds in the dark of their wings
With his stout staff he lays about to strike
Nor without taking wounds does he wager to win
Surely he shatters the birds’ swift bodies.

Thus must a man make merry with death
Turning always towards it.

Image from “Roots”, a build in Second Life by Cica Ghost, December 2015.
This story first appeared on Crap Mariner’s 100 word story weekly challenge.
Posted by Tura at 23:20 No comments: