I finally finished the tower of St. Mary-le-Bow, and presented it at MadPea Show and Tell today, temporarily held in a skybox while the sim down below is being remodelled.


When I began on the project, not only had mesh not been invented, sculpts hadn't been invented, which is why the bells are made of prims despite the shape being ideally suited to sculpting. 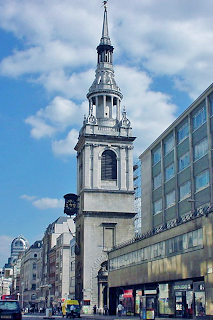 This is the real tower. I followed the general form, but with a few deliberate changes. The real one has a large doorway only on the two sides giving onto the street, but for a stand-alone tower it made more sense to put a doorway in each side. The empty interiors are imaginary. The bell chamber is open so the bells can be seen, and just for fun I added the anemometer and wind speed dial. The weathercock is made from a picture of the real one. 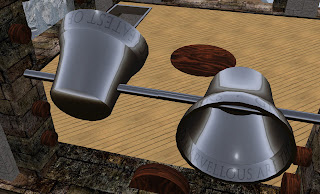 I chose new inscriptions for the bells, as what's etched on the real bells is far too long to replicate in SL. 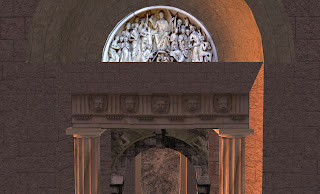 Credits: stonework and flooring are either free or bought from (as far as I remember) Twisted Thorn or Textures’r’Us. Lunettes are public domain from Wikipedia, lintel frieze and noticeboard are my own photographs, street signs made in Photoshop. All modelling and scripting is my own. I just got into making sculpts in the last year or so, so I made some fluted columns for the doorways. I make sculpts in Matlab. The bell sound is a free one off the web, which I pitch-shifted in Audacity to make all the pitches.

This is the most complex piece of scripting I've ever attempted. Bell-ringers have a way of notating complex peals that enables them to write down a complete peal of hundreds or even thousands of changes in a single line of text. (A ”change” is to ring each bell once, in some order, and a ”peal” is a sequence of changes in which no change occurs more than once. A peal must begin and end with ”rounds”, i.e. ringing each bell in descending order of pitch.)

This is McWomble's Evil Hybrid Royal:

”Royal” means it’s rung with ten bells. (Just because, that's why.) Don’t ask me who or what McWomble is. (I wonder if there's a peal called Akond of Swat Major?) Anyway, the line above specifies a sequence of 30 changes (a ”change”, more precisely, is the change in the order of the bells from one ring of all the bells to the next). The last change leaves the bells being rung in the order 1-3-4-5-6-7-8-9-0-2, so applying that whole sequence eight more times returns to rounds at the end, for a total of 270 changes. The notation is explained in more detail in a notecard you can get from a notecard giver in the bell chamber.

I doubt if SL needs more than one copy of the Bow Tower, but I'm open to requests for other versions of the bell chamber. It can be made with any number of bells up to 16, all within whisper distance of the central prim.
Posted by Tura at 22:37