Tura has made a balloon. 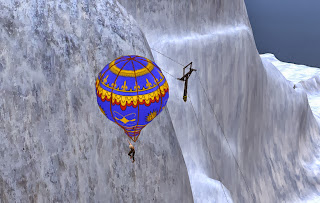 I like flying a balloon in Second Life, and it's a common way for landowners to provide a guided tour of their property, but I never found a balloon for general flying that I liked. So I’ve made this one. 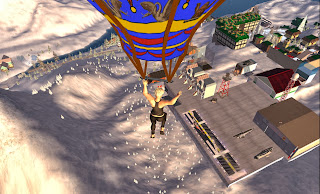 It's called a cloudhopper. There’s no gondola, just a parachute harness from which the rider hangs with nothing beneath her feet. 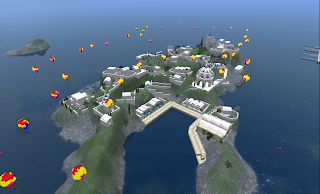 Circumnavigation of a Greek Island. Bohol and Celebes.

The unique feature of this balloon it that it can automatically navigate. It can follow the shoreline all the way around a continent, seek out hills and valleys, blow with the wind, or be manually driven. Above is a circumnavigation of the Greek island in the Sea of Fables, in the Bohol and Celebes sims. (The blotchy shape of the balloon is due to LODding—I'm looking clear across two sims here.)

Here's the route it flew. This was completely automatic, flown at a constant speed of a few metres per second with no intervention by the pilot. This picture is also automatically generated—the balloon logs its position to a web site of mine, which plots the route on top of map images pulled from the Linden servers. 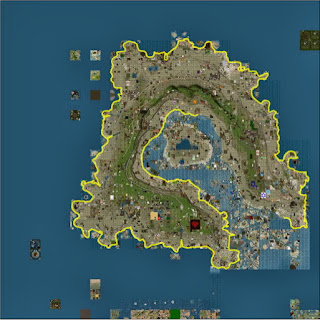 Here's a circumnavigation of most of Heterocea Atoll. There were just a few places where I had to switch to manual control to get around some private parcels, or to steer it through some densely packed islands.

There’s still quite a lot I want to do before exhibiting this live to the public: finish a rigged mesh parachute harness that I have a first draft of, an animation for the rider, and a public version of the web site for route mapping.
Posted by Tura at 20:02