Tura has built an art gallery. 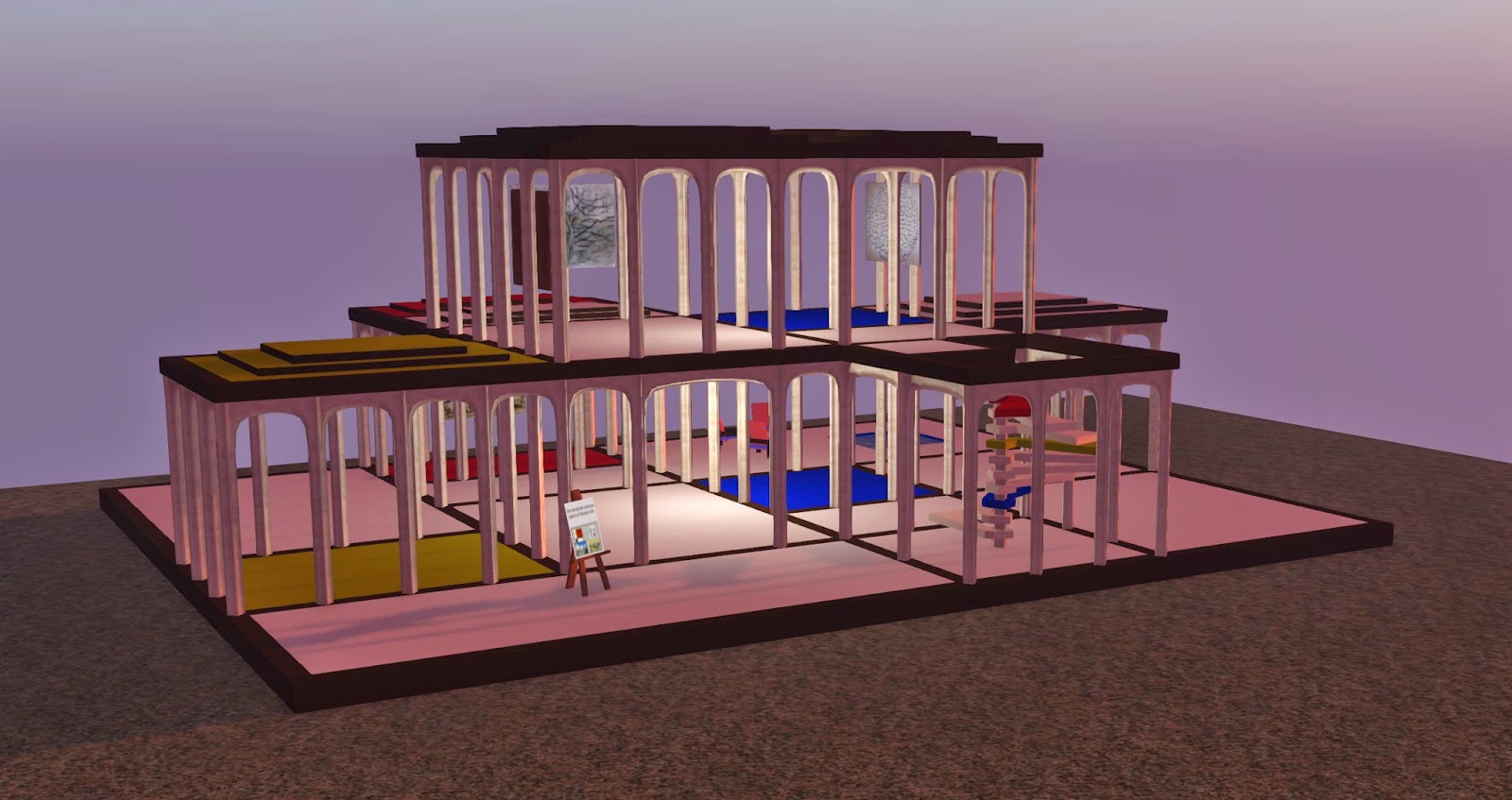 The Mondrian-Johnson Gallery of Modern Art.


The theme for the B2B competition build in July 2014 was to make a building based on the architecture of Philip Johnson and the art of Paul Mondrian.


I knew something of Mondrian's art, but I had never heard of Philip Johnson. So I went to Google Images for inspiration. I didn't really get an impression of a single style running through his oeuvre, but I eventually found motifs in some of his works that tickled my brain. 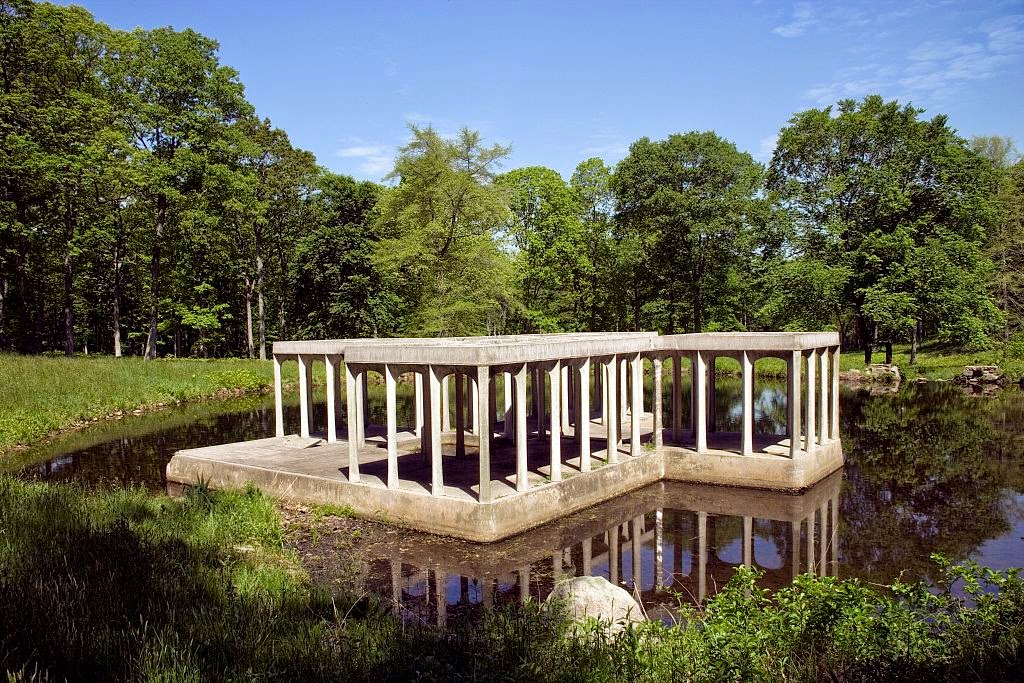 The Pavilion. This is actually tiny—look at the size of the grass nearby. 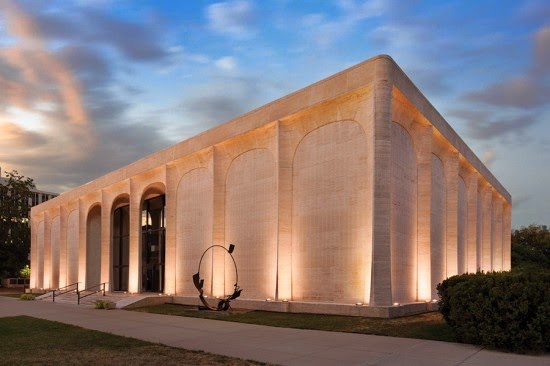 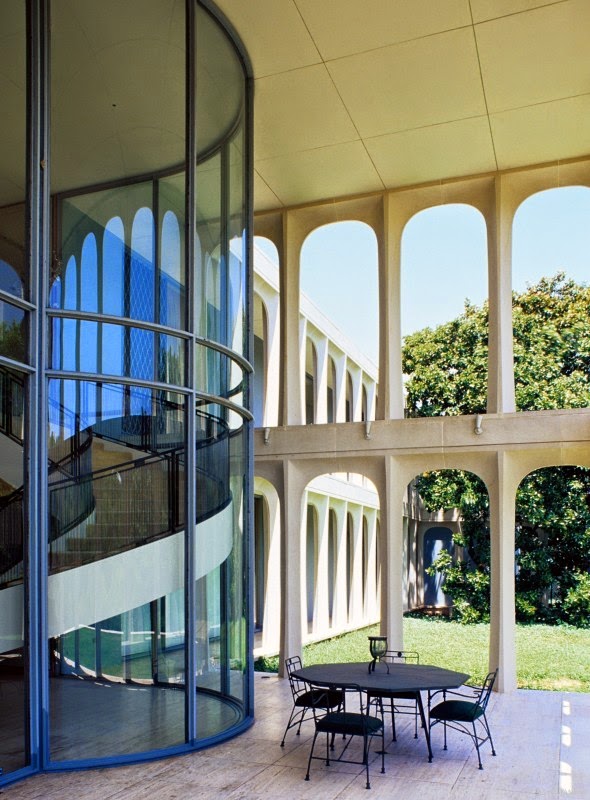 
I liked the subtle forms of these pillars and arches, and the layout of the Pavilion was reminiscent of the rectangular grids that Mondrian is known for. So I had my idea for a building.

I started drawing possible floor plans, breaking up the regular square grid of the Pavilion. The floors, instead of being stone, would be a Mondrian-style grid of rectangles, one for each "room", mostly white but with a few in bright red, yellow, or blue. The pillars would all stand on the black lines separating the rectangles. 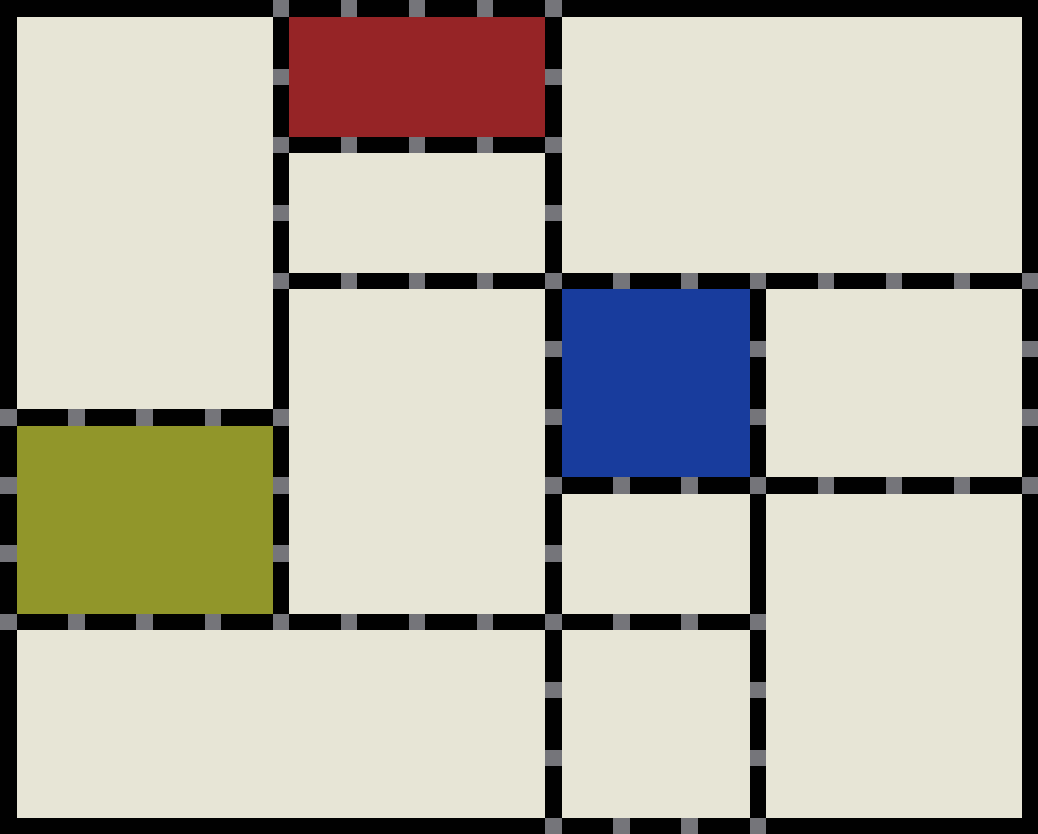 A draft of the ground plan.

The pillars are square at ground level, the corners pointing along and perpendicular to the rows. Up the shaft, their sides are a little concave. At the top, they spring arches to their neighbours, still retaining a certain concavity. 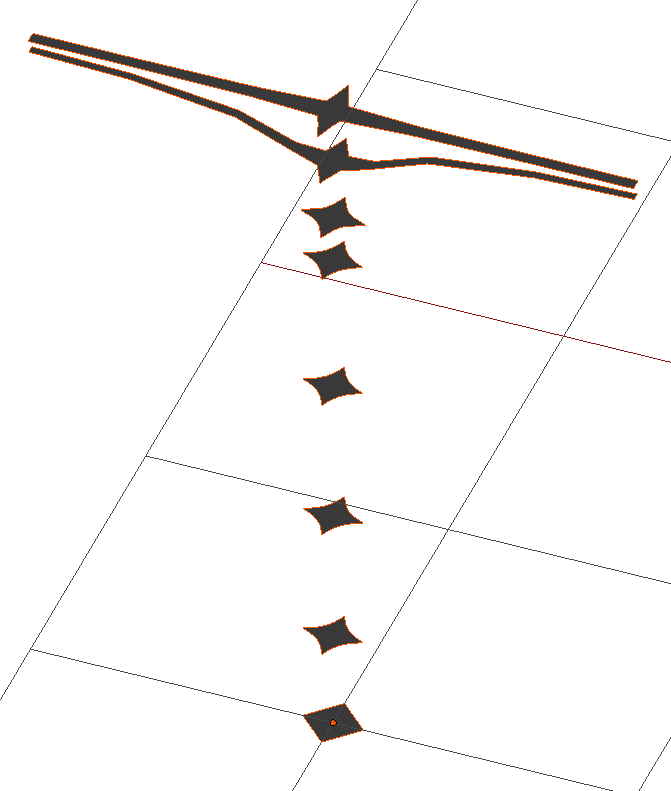 Cross-sections of the pillars


The cross-section naturally divides into 8 pieces, many of which are symmetrical repetitions of each other. We want to build just one of each component, UV unwrap it, and assemble the parts. I begin by making the cross-sections as curves, converting them to mesh, and using the Join Edge Loops operation to make a whole 1/8 pillar. Then I tweaked the individual vertices until the surface looked right, and eliminated as many polygons as possible. 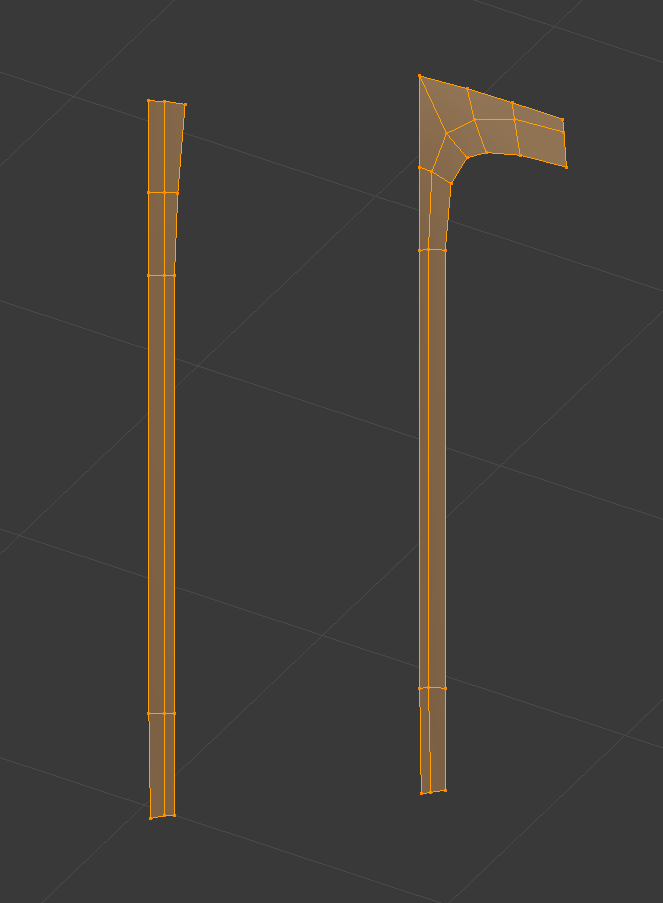 The final evolution of the one-eighth pillars.

Would the model I contemplated fit within the LI limit of 150? I generated 81 copies of the pillar arranged in a square, then uploaded it to the Beta grid, with minimal LOD, and a physics model consisting of a block for each pillar. That gave a lower bound on the LI. By walking between the pillars, I got a feel for what scale the whole thing should be built at. 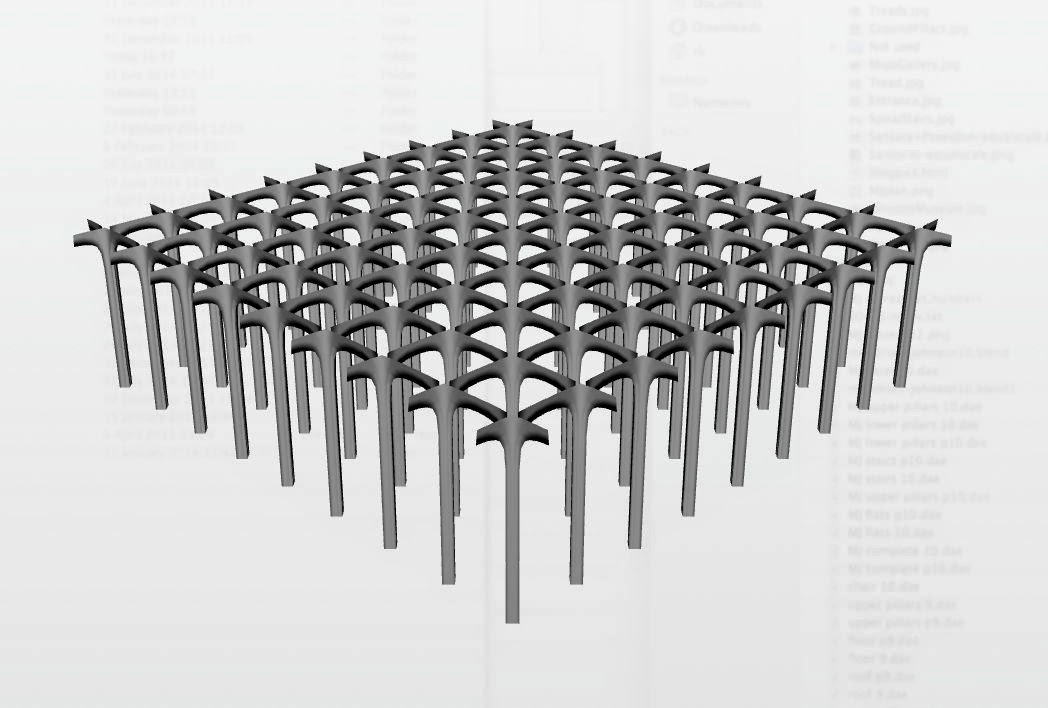 
I ran into some confusing results about LI which I never got to the bottom of. At one point I had something whose LI would increase, quite drastically, the smaller I made it. I've since heard that other people have seen that as well, but I don't know the explanation. At any rate, resizing the build after upload seemed chancy, so I made sure that the model in Blender was the size I wanted it in-world. I eventually settled on a 2 metre spacing of the pillars, at which the test model had an LI of about 70. That would do, I decided. I would probably be able to afford a two-storey building.

I sketched out various layouts, keeping track of how many pillars they would need. For two storeys, there would need to be a staircase. 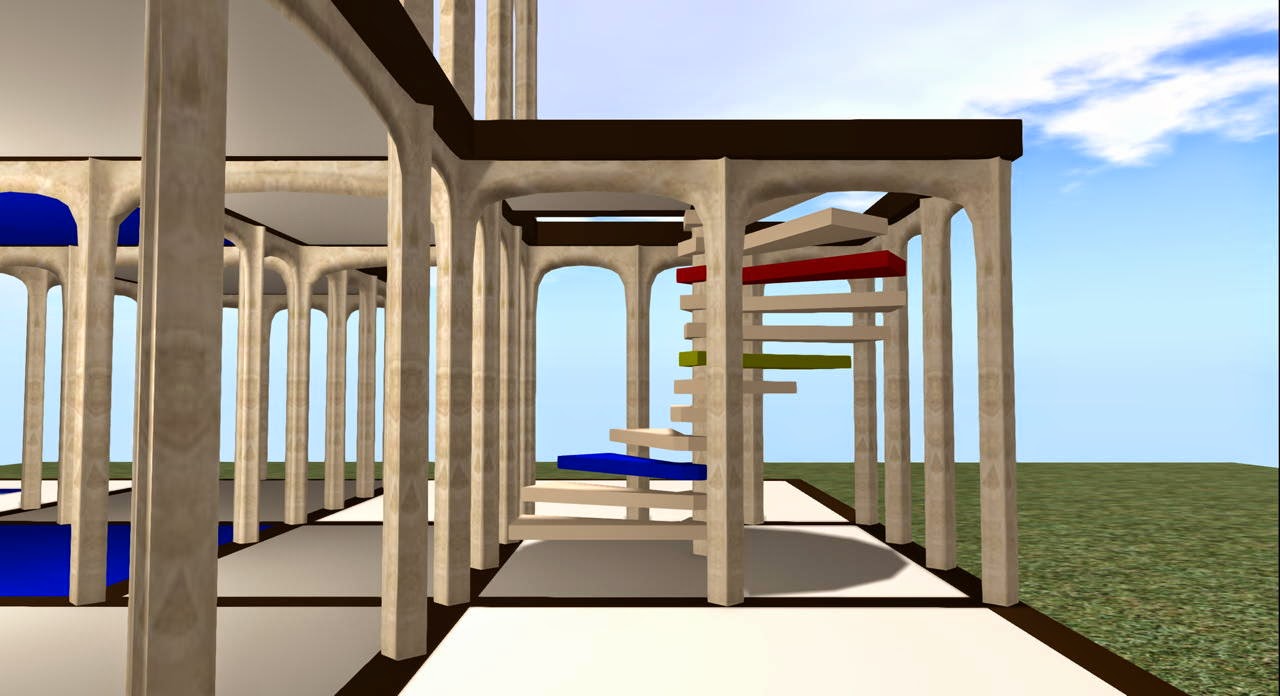 
I built a spiral stair in prims in SL to get a feeling for the necessary scale, then made it in Blender. 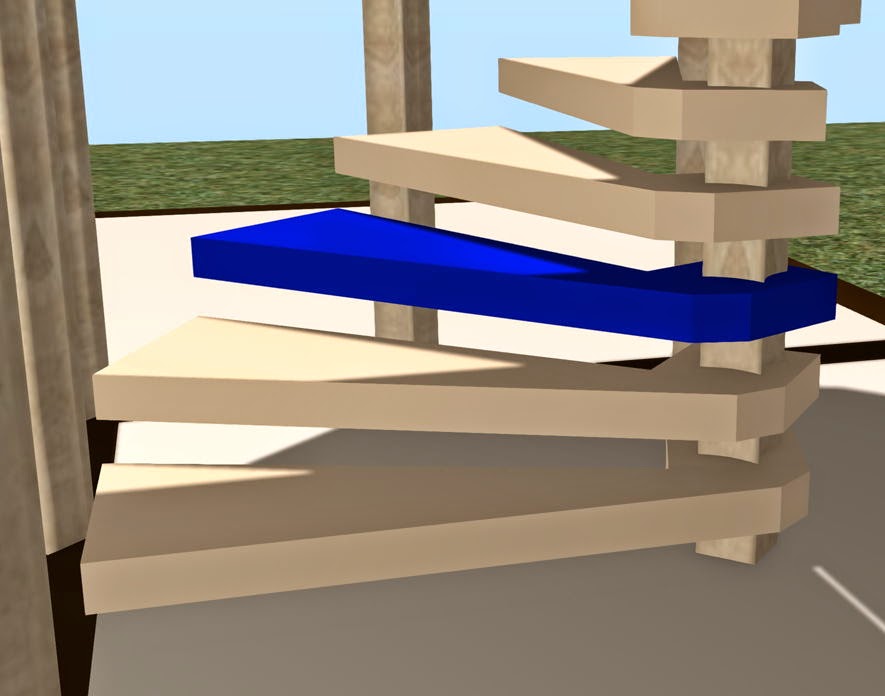 The offset shape of the treads came from finding that making them simple wedges, whose sides were radii extending from the central pillar, made them awkwardly narrow at their inner ends. The forwards edge had to be radial, to join up properly with the landing at the top, so I moved the back edge back a little. The result is a much more interesting shape, which I would never have come up with if I'd just thought "make an interesting shape".

There are several reasons that interior spaces in SL have to be built bigger than RL.


Firstly, avatars are almost all larger than life size. This is partly due to people's competitive vanity pushing their sliders up to 100. But those sliders are strangely calibrated to begin with. There are four that affect total body height, and for my shape all of them are in the range of 40 to 50. That should correspond to a female figure of a little below average height -- maybe 5'5". Yet in SL Tura is 5'11" in bare feet.


Secondly, default camera placement is rather far from the avatar. Penny Patton and Jo Yardley have written about this, with advice for how to set the camera closer in. It certainly improves my experience of SL, but still, some room has to be allowed for the camera behind one's avatar to not swing through the walls. My own preference is to have the camera closer in than the default, but still far enough away to be able to see most of my avatar.


A third factor is walking speed. Everyone in Second Life walks at a bit more than 3 metres/second, or about 6 miles per hour. That's a jog or a very brisk march in RL. This makes it a little difficult to walk up closely coiled stairs, or walk around life-sized rooms that would be easily negotiable in RL.


Which is why the treads of the spiral stair are two metres wide. At that scale they feel comfortable to get up and down, but in RL they would be enormous: a four metre wide helix in a room 6 metres square and nearly 6 metres high.


The outdoors, in contrast, is always well below lifesize. Poseidon Island is a wonderful creation, but it's less than half a mile long. A real Greek island that size would be an uninhabited rocky outcrop. I can see good reasons for this, but that's another topic. It comes down to Reality and Virtual Reality being different media, with different constraints. Taking anything from one to the other is always a process of translation, not copying.

But I digress. Here's a picture of the RL island of Santorini, which is about 9 by 10 km, and the SL continent of Sansara, to the same scale. Poseidon island is ringed.

Santorini (from Google Maps) and Sansara, with Poseidon Island.

This building has no walls, and even the narrow arches are easily walkable though. The visitor's movements therefore have to be directed more subtly. The front of the room that I decided was the entrance hall is four arches wide. To make an "entrance", I replaced the two middle arches by a single wide arch. This meant making a version of the one-eighth pillar stretched to twice its length. I did the same to the "walls" further back, opening a passage through to the far side of the building, where a large hanging picture terminates the prospect. 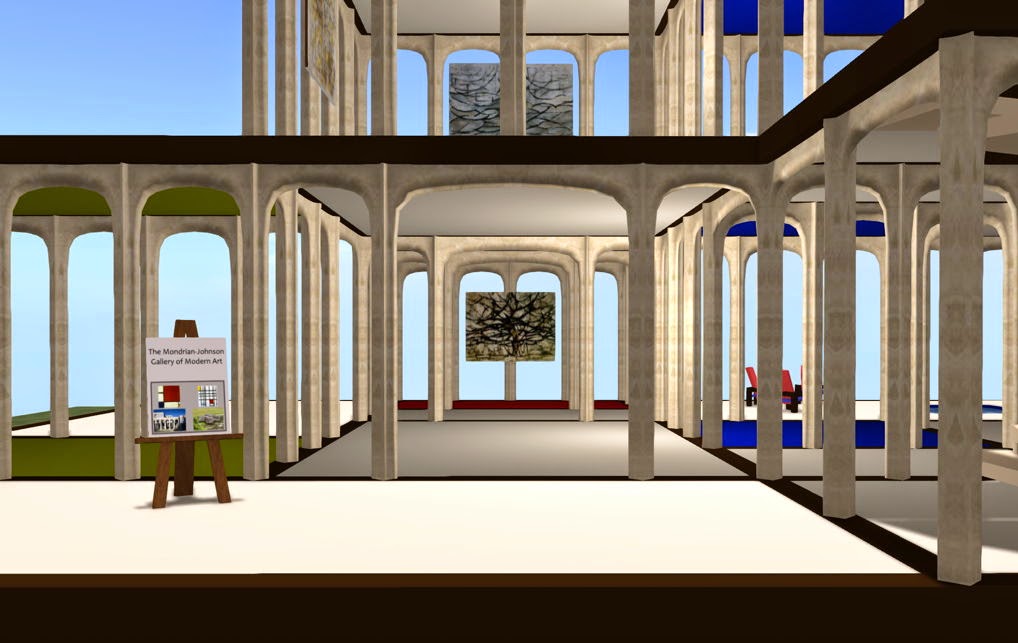 "It terminates the prospect."
This phrase is forever etched in my memory since seeing a performance of The Clandestine Marriage a long time ago. The nouveau riche Mr Sterling, a merchant and would-be gentleman, is proudly showing an old aristocrat, Lord Ogleby (played by Alastair Sim in his seventies, the master of lugubrious ogling), around the country estate he has had designed according to the very latest fashion. Lord Ogleby inquires about an architectural detail in the distance, to be informed that it is a spire, built half-way up a tree. Ogleby: "A spire! And halfway up a tree!" Sterling: "It terminates the prospect."


For clearer access to the spiral stairs, I replaced a row of three arches by two, using a one-eighth pillar stretched to one and a half times the standard length. I made similar changes in a few other places.

The double arch invites the visitor to walk directly to the foot of the stairs.
I should have done this to the left of the stairs also, but there is still a triple arch there.


The different arch lengths gave a total of four versions of the one-eighth pillar. Mirrored in one axis, they become four different quarter pillars. Each whole pillar consists of a quarter pillar on each side, having a reach corresponding to the distance to the next pillar in that direction, if any.


After building a single example of each different form of pillar that would be needed, it was then just a matter of dragging copies to everywhere a pillar should be, using snap-to-grid for exact placement. Linking them together into a single mesh and removing duplicate vertexes gave a complete model for all of the pillars of the ground floor. 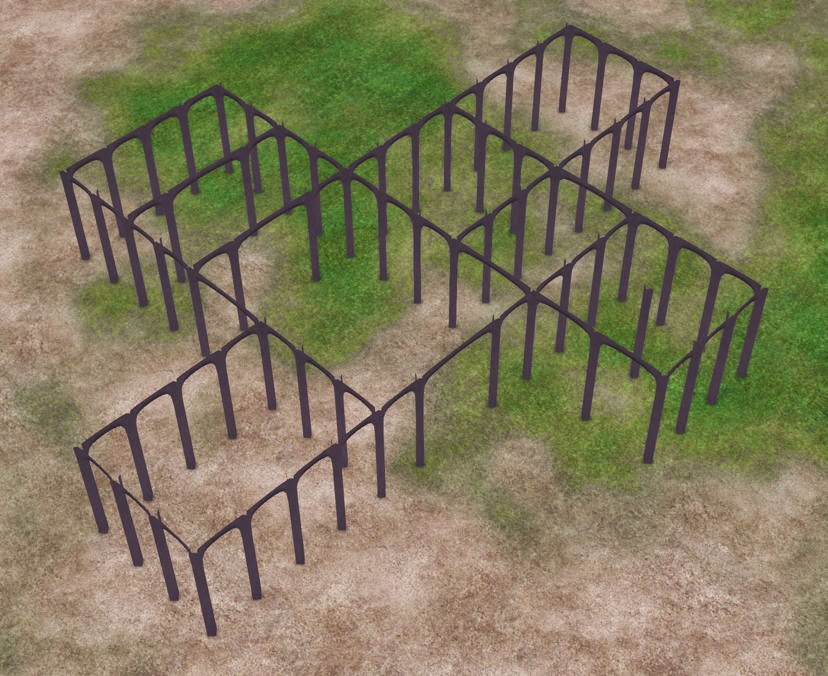 
At this point it was routine to build a second floor above the central rooms of the ground floor.

The floor is a mesh block, subdivided along every line across which the colour changes anywhere. There are no textures or UV unwrapping. I just assigned a coloured material to each set of faces of the same colour: black, white, red, blue, or yellow. The black is actually a very dark brown, because with absolute black you can't see edges between black surfaces very well. The upper floor is a duplicate of the ground floor, with unnecessary parts trimmed off, and the roof was made by trimming the upper floor.


There is scope for eliminating some polygons from these, but I decided that saving a couple of dozen triangles wasn't worth it given the time constraints of the competition, and it would make it more difficult to change the layout later if I wanted to.

The physics model has a block for each pillar. For each of the flats (floor/ceiling/roof) the physics model is the same, with all unnecessary subdivisions removed. The stair has a physical block for each tread, and a cylinder around the whole to stop people falling off. Upstairs, there is physics to stop people getting out onto the roof of the lower floor. That's quite a lot of physics, but it all fitted into the LI allocation.

I confess, I didn't make LODs for this. I left them on automatic with the triangle allocation turned down to zero. The gallery is big enough that its high LOD model was visible from the far side of the competition platform, so I decided that would do.

There is something of a black art to uploading mesh. Should everything be combined into a single mesh, or divided into separate pieces to be linked in-world? The build only needs six different faces: one for the pillar stone texture, and one for each of the five Mondrian colours, so it could be done as one mesh. Through a process of trial and error I ended up having one object for the flats, one for the ground floor pillars, and one for the upper floor pillars. I don't know if LI would be changed, or in what direction, by merging them into one mesh.

With the remaining prim allocation, I added the water feature at the back, Mondrian-style chairs, and Mondrian artworks. Finally an easel by the entrance showing some of the inspirations for the build. 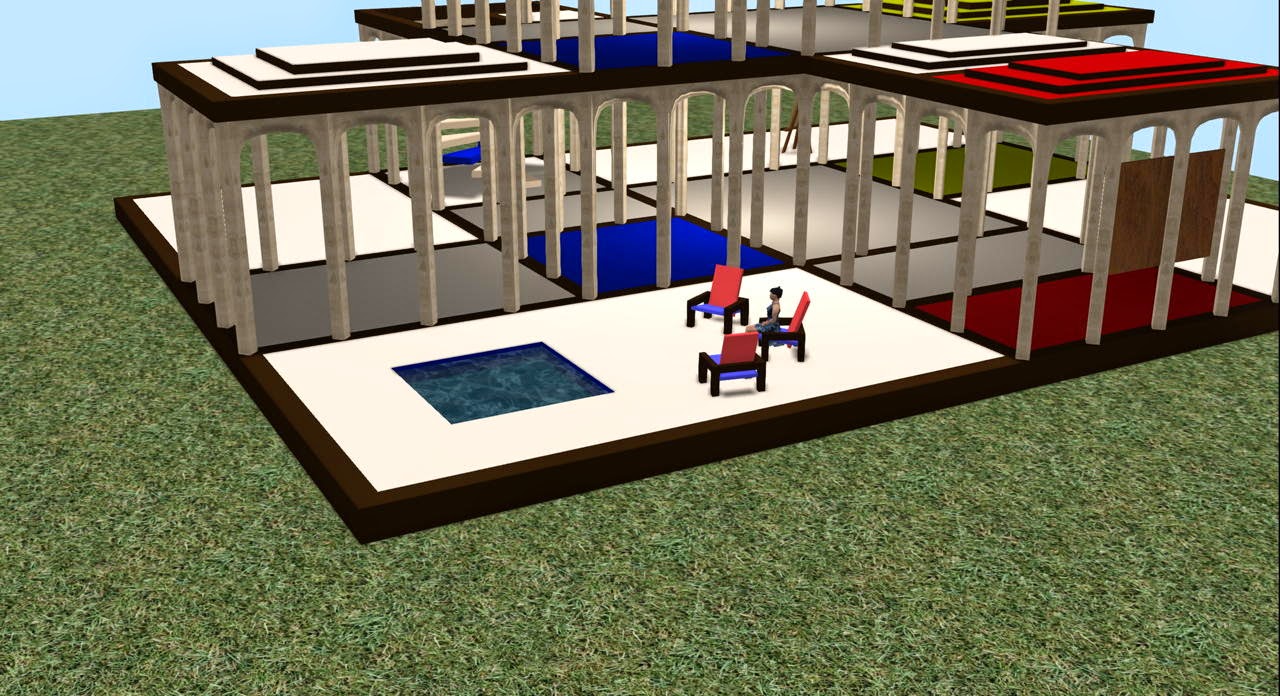 A place to relax.