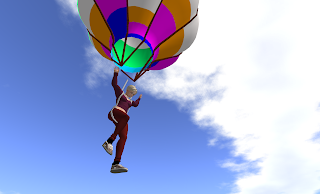 Tura does not have nearly as much time as she would like for SL projects.

Since last time, I've done some weight-painting, mirrored the half-harness, uploaded it to SL, and worn it, with the results in the picture.  The modelling and weighting need a lot of work still, but the basic workflow all works.

I tried to make a first approximation to the bone weights by copying them over from the avatar skin weights (using this add-on for Blender 2.6). However, no criticism of the add-on intended, but I didn't expect it to work very well for this, and it didn't.  The problem is that the thigh straps touch between the legs, with the result that each of them ended up bound to both thigh bones.  There were also some strange effects elsewhere, with parts of the harness partly bound to the forearms.  So I scrubbed all of the weights and made them from scratch. 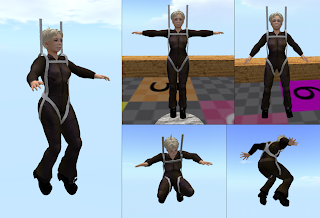 This is the result. The harness is mainly bound to the thigh bones and the three bones running up the torso. The collarbones and upper arm bones also need some influence in the shoulder region, just enough to keep the shoulder area from penetrating through the straps.

The straps need a thorough going over to make them lie better against the body, without any of the odd twists and bends they have at present.  The weights also need worked over to eliminate some skin penetrations when the avatar moves, and to make smoother transitions between neighbouring bones.

The vertical sections rising from the shoulders should be cut down to a few inches, and terminated by modelling some sort of fitting, and the balloon cables altered to join on.

Then I need to subdivide the mesh some more and bevel the edges.

Once all that's done, there's texturing and making a suitable animation. The first picture uses the ”falling” anim from my AO, which works pretty well, but I'll need to make one of my own. It will have to keep the chest bone fixed, so that if the balloon canopy is attached there as well, the balloon stays upright and there's no relative movement between the harness and the balloon cables.
Posted by Tura at 23:13