Tura is experiencing mission creep. The cloudhopper balloon is on hold while I work on this:

This is a recreation of the tower of St. Mary-Le-Bow in London, which I built a long time ago, and I'm trying to get into a form that I can exhibit at a Show & Tell. Probably MadPea, as it's heavily scripted and it’s never going to work in the lag at Little Blue Fermi.

The build is too big to just put in my pocket and pull out on the Show & Tell stage.  I need a rezzer to automatically rez and position the parts, but I found that for some reason, Rez-Faux didn't play well with this.  I never tracked down exactly why, but part of the problem is that the build contains several animated components. 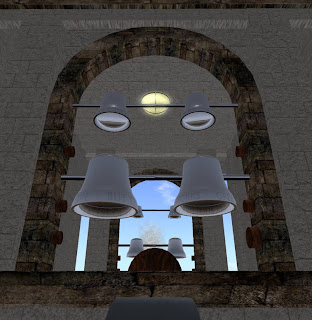 A set of bells that do change-ringing. The whole project actually began with that idea, and I made the tower just to have something to put them in. 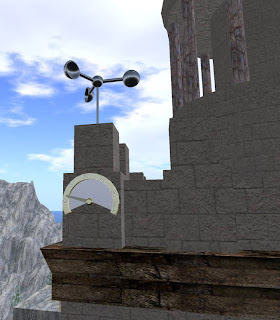 A weathercock, anemometer, and wind speed indicator that move with the wind. And a clock.

All of these have to be put into a standard "stopped" state before stuffing them into the rezzer box, and on rezzing and positioning the build, I need a way to start them all up.  And a way to stop and reset them all if I want to move the build.

I don't want to just hack something to work for this build, but have a system for doing this sort of thing, that will also avoid crosstalk between two such builds next to each other, and... and...  Hence the mission creep.


I'm writing my own rezzer scripts, because that's easier than debugging the interaction with a third-party rezzer, and developing a standard protocol for starting, stopping and resetting all my scripted objects, and one by one, revising the components of this build to play well with the rezzer.


For example, the wind speed meter was originally just a quick hack: it's hard wired into it that it rotates the meter needle around the Y axis, and zero speed is -90 degrees. That won't do when the build might be rezzed in any orientation.


The animated bells are the most complicated scripting in this build by far, but will be the easiest to make compatible with the rezzer, as it has its own rezzer built in, and in its initial state is just a single inert prim.  It already knows how to rez the bells in positions and orientations relative to itself.

And then I'm tempted to update the stone textures, and get a better picture texture for the dragon weathercock, and tidy up the precise alignment of a few things, and replace the prim bells by sculpts... 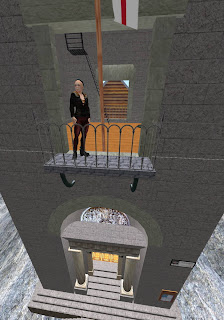